Phase 1 of building ThreadStart in public is over. A full (and very long) day of shipping ends with lots of learnding, worries and a landing page: https://threadstart.io/ The most important thing first:

Did I achieve my goal?

You can check out the thread of Phase 1 here. 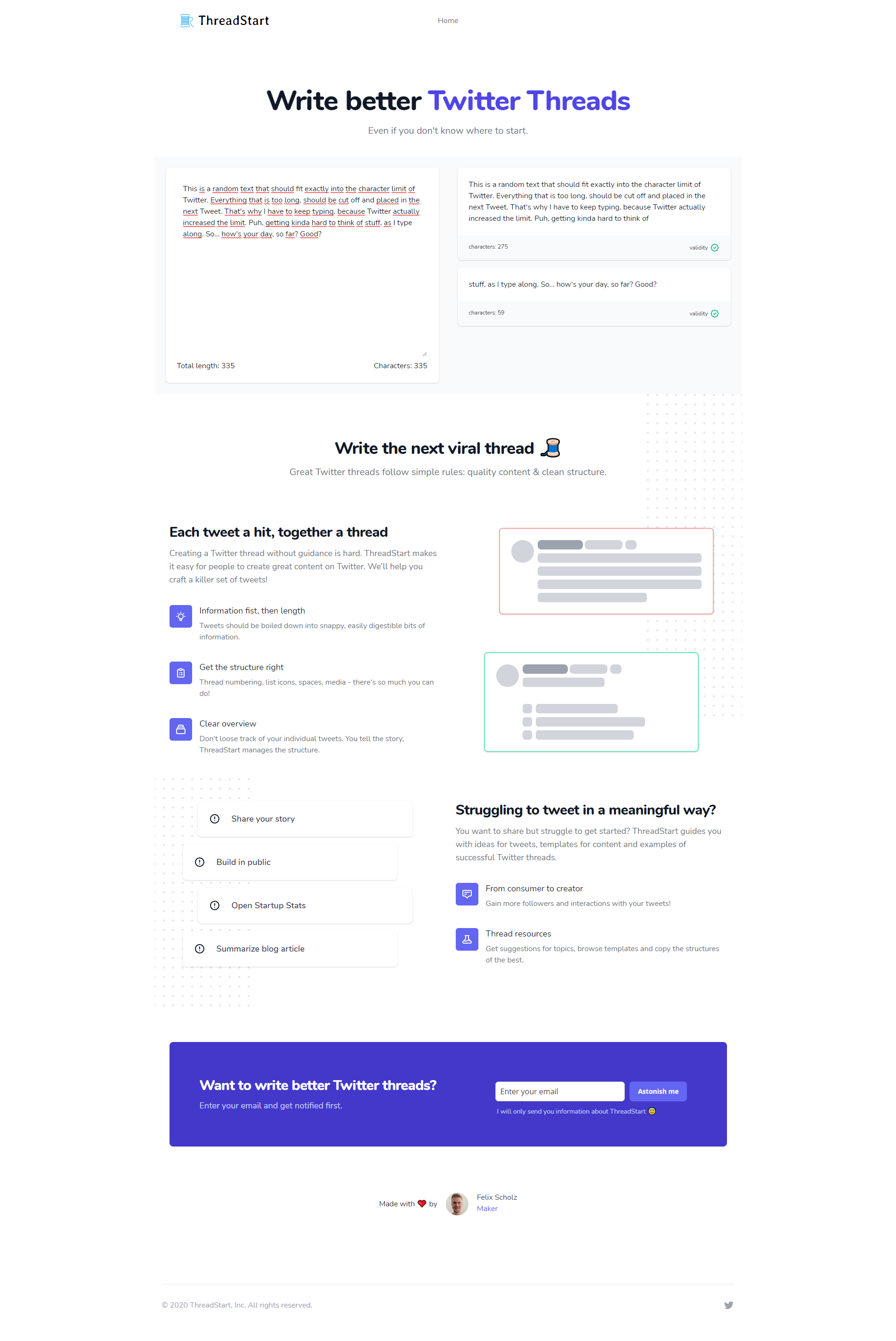 I achieved my goal. I shipped a nice little landing page. It showcases the functionality already. Throughout the day I got feedback, encouragement and engagement on my tweets. I learned to extremely prioritize. To focus on shipping quickly exclusively.

All in all, I consider phase 1 of this experiment a success.

It took a long time to get the first subscriber. Towards the end I thought I wouldn’t make it. Thinking about it its not surprising, though. The finished unfinished app came together in the final hours of day one, so why would many people sign up before that. Just because people show interest in the process of building doesn’t mean, they actually need the app. Or believe in it at this point. That’s understandable and okay.

Even though the goal for success was set very low, it still creates higher expectations in my head. That’s totally on me, and another reason why I’m happy I have written down a hard target before starting. Emotions are not rational. Setting targets and evaluating them should be done with a clear mind, though.

Building in public is a great way to engage with people that follow you and your projects. But that requires an audience. At least a small one. In the beginning it’s hard to get outside engagement. People don’t follow you; they don’t know you and they don’t necessarily trust you. Followers and trust have to be earned. Which is why I’m doing this in the first place.

The point I’m trying to make is: watching other people build in public and seeing them get responses, users and sales on day 1 does not mean it is going to be the same for you or me. But I believe it will be. Because they are probably at a different stage already. One that I am not yet, but one that I will get to.

The hard stats are:

Obviously, there are no users & sales so far because there’s no app yet. The goal was one subscriber. I got 7, so that’s more than enough to continue with phase 2. The conversion rate is 2.21% which isn’t high but expectable for this kind of quick landing page project. The visitors are tracked by the newsletter integration, so it won’t be super accurate, but enough to eyeball it. In comparison the launch tweet for phase 1 got 1,124 impressions. No, that’s not a lot but that’s what having a small account means. Considering this I’d say the numbers look good.

The next step is Phase 2. It started on the 8th of January 2021. This phase makes an application out of the landing page and its promise. One that does what it says, with the goal of getting the first ThreadStart user.